The United States has a strong identity tied to oil. From the oil tycoons of the Old West to the new man camps of the Bakken Shale, oil production is as American as apple pie. However, the current consumption of oil outpaces U.S. production, creating a reliance on other oil-producing countries.  Oil extraction in the U.S. today has moved from Barron drillers out west to a highly technical operation involving hydraulic fracturing and horizontal drilling.  Shale oil, or "tight oil", is similar to shale gas in that a majority of the U.S. resource is trapped in sedimentary rock formations deep below the surface.

Ohio was an early player in the oil industry in the U.S., starting back in 1859 in northeast Ohio. The rich oil and gas resources found along the Appalachian Basin and Marcellus Shale area, with oil production continuing to this day. In 2016, Ohio was producing an average of 60,000 barrels per day, which was slightly lower than in 2015, but is evidence of a trend of increasing oil production (EIA 2017). In June of 2017, Ohio ranked in as the 14th largest producer of oil in the U.S. as Texas and North Dakota dominate oil production.

The petroleum production numbers for Ohio are much lower than states that now dominate production including Texas and North Dakota.

Although Appalachia has a history of producing oil, it is targeted now for its rich gas plays, particularly around the northern range. 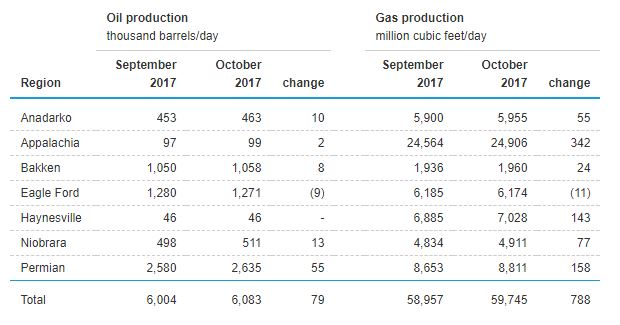 The U.S. averaged 8.9 million barrels of crude oil per day in 2016, while the total petroleum consumption was about 19.6 million barrels a day. In 2016, most of the oil imported is purchased from Canada, Saudi Arabia, and Venezuela. Most of the consumption of petroleum goes to transportation to support the long commutes associated with urban sprawl and car culture.

A majority of the oil refineries exist in Texas and Louisiana, although others are scattered throughout the U.S. including 4 in Ohio.

An up-to-date drilling report by the EIA can be found here: https://www.eia.gov/petroleum/drilling/pdf/dpr-full.pdf